Ground meat and rice are traditional yet barley, lentils, quinoa and pine nuts are great pepper stuffings too!

Traditionally, rice was the grain of choice to stuff things: peppers, squash, eggplant, grape leaves, cabbage and other stuff-able things.

But the modern twist on traditional food says, “the sky is the limit.” Here are just a few interchangeable ideas to the traditional rice and meat filling.

I don’t remember seeing these adorable, sweet, mini peppers growing up. They taste more gentle than bell peppers and the color is not lost when cooking.

These mini peppers have little inside to clean out, so prepping them to stuff is fast and easy; simply cut the tops (save to cover), pull out the string that has a few seeds and you are ready to stuff.

Make sure to cook the stuffing you will use, beans, lentils, rice, barley or meat, because once these delicate peppers are stuffed, they only take about ten-minutes in the oven to soften them, and warm the filling.

Coming from a large family, I never learned how to cook for just two people! I inevitably have leftovers.

Since I often cook lamb, I like to save a small amount to chop into bits, mix with a lovely barley I simmer in some of the meat drippings, lots of garlic and water, and stuff peppers with this mix. A meal in itself

Zucchini and yellow squash are my favorite go-to veggies for so many dishes I make. They are so colorful (which I like in my food), and when grated, they disappear in sauces, yet amp up the flavor and nutrients.

Grandma’s Sneaky Meatballs with ground meat (or ground lentils), was something I created for my picky eater grandkids when they were little. I would grate zucchini and squash and mix it into the ground meat or lentils for a healthy meatball-ish!

Shaving zucchini and yellow squash, slightly sauté them in olive oil, garlic and lemon, just enough to soften but not overcook, then stuffing them into a roasted bell pepper, makes for a delicious stuffed vegan pepper! 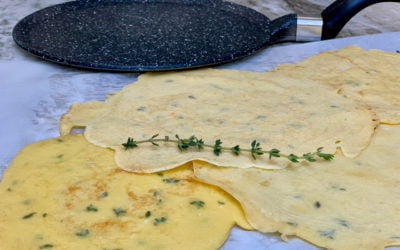 Oh, the things these delicate savory herb crepes can wrap around or be stuffed with. But these delicate looking crepes are always my 'security blanket' to wrap around a Beef Wellington before wrapping with puff pastry. Find out why! Savory Herb Crepes What Is A Crepe?...

END_OF_DOCUMENT_TOKEN_TO_BE_REPLACED 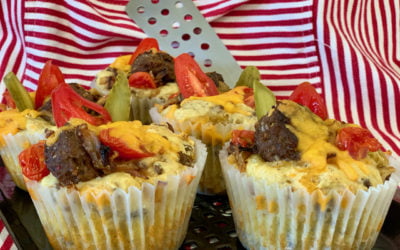 Grass fed beef, cheddar cheese, smoked jalapeño, tomato and pickles all baked into a caramelized onion muffin batter with another mini cheeseburger on top! Too whimsically delicious to be a muffin. Cheeseburger Muffins Cheeseburger Passion Ah the thought of a...