by rdaumit | Mediterranean, Side Dishes

Moroccan rice recipe with dried fruit, cooked stove top, with an exotic array of spices makes this recipe a great accompaniment to any meal, or simply put an egg on top and make this the meal!

It amazes me that rice is grown in nearly every continent in the world, which means it has that many different ways of preparing it. Rice is among the most versatile of foods, in that, it can be served as an accompaniment to a meal, actually be the basis of the meal or added to soups or become an amazing dessert also served with dried fruit.

Imagine that. A food that is equally known as the breakfast food that starts the day in Japan and China, or end the day with a luscious pudding in Greece.

The sweetness of dried fruits liven up the flavors in any savory dish. Add to that, some element of sour, salty, bitter or heat, and you have the mouth’s most favored dance of umami tastes going on inside.

In Moroccan cooking, as is often the same throughout many Mediterranean regions, dried fruits were often added to lamb or beef stews to simmer low and slow because they aided in tenderizing inexpensive cuts of meat.

Since sugar molecules are much larger than salt ions, which act as a natural tenderizer in cheap cuts of meat, ancient day cooking just instinctively knew how dried fruits, often dates raisins or figs, would tenderize an old and tough cut of meat.

Fast forward to modern day barbecue fanatics and they will each swear by their own concoction of meat tenderizing marinades, to which most often will find their base in some form of dried fruits, fresh fruit juices, or fermented fruits, ie wine! Why? Sugar!

This recipe is nothing short of brilliant, simply because once it is made, it has a vast variety of uses in both savory or sweet dishes, keeps for days in the fridge, is delicious served at room temperature (which makes it a great to-go addition to a lunch), and freezes beautifully as well.

I made this Moroccan rice with dried fruit to serve with a favored Iranian chicken stew, called Fesenjan, and I also love this recipe with my favorite Moroccan Lamb stew, Moroccan Lamb Tajine, alongside lamb shanks, in a sweet and sour soup or simply all by itself with a dollop of homemade Lebneh on top.

There are about as many ways to approach cooking rice as there are continents that grow and prepare rice. In many Asian countries, rice is usually prepared in a rice cooker, which steams it, and has it come out looking pure white. Sorry Asian world, this is not my favorite way of preparing rice, simply because it’s just rice. Boom. Nothing else.

Okay, okay. In Japan I know it is almost sacrilegious to dirty the rice, and believe it or not there are actually cultural and religious rites to the art of eating rice. Just look at the face of a true Japanese sushi master when we Americans pour soy sauce all over their pure white rice. No, no, no!

Then, head way south here in America and you will find an entire culture and cuisine built around ‘dirty rice’! Don’t blame the Americans alone, we dipped our finger in French, Spanish and West African pots on a stove, tossed the flavors all together and came out with some down-home unusual foods re-created in Louisiana Creole cuisine.

Moroccan rice, as is the case throughout many Middle Eastern and Mediterranean rice dishes, are cooked over fire, in a pot, lending itself to a vast variety of added flavors to enhance the dish it is intended to be served with. Dried fruits, onions and garlic, olive oil or butter and spices are able to be cooked right into the rice, bringing this little grain alive with so much flavor while it cooks, therefore not dependent on dumping sauces on top, after the rice is cooked!

As for me, I grew up cooking rice always on top the stove, over fire, in a pot and never saw the likes of a rice cooker until I grew up and began to experience world cuisine; and sorry Louisiana, I have yet to taste ‘dirty rice’ though I plan to!

Rice in short… we always revert back to our roots, don’t we!

My mom’s orange blossom and date stuffed cookie dough of farina and Arab spices, shaped in a traditional wooden Ma’moul mold. This cookie, known as Kaak bel Ajweh, is the cookie recipe most loved from my childhood.  Date Stuffed Arab Cookie Traditional Arab...

END_OF_DOCUMENT_TOKEN_TO_BE_REPLACED 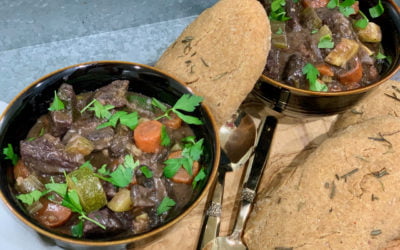