Homemade Mediterranean Yogurt, from an ancient technique, is simply boiled milk, added starter and a warm blanket wrapped around until it sets in the pot.

Yogurt is a creamy, luscious, soothing, milky fermented bacteria that has been around for longer than it has been documented.

And while here in America we know yogurt that is primarily made from cow’s milk, sheep, goat, and camel milk were the first documented yogurt recipes made.

The word Yogurt is actually a Turkish word. I knew yogurt as Laban, or Lebneh, while growing up in a Syrian/American home.

Once or twice a month, a huge pot of warm milk, wrapped in a blanket, would set out on our kitchen counter until morning.

In the morning the pot of milk that had changed its consistency would be unwrapped, careful not to jiggle, as it was moved to the refrigerator to set, gel, and get cold.

That was it. A Yogurt recipe that had been done in this way for generations!

Yogurt from my childhood was not sugary, not frozen, not a dessert. Homemade yogurt was, instead, the staple in many savory meals, sauces, soups, cheese and drinks.

It was often eaten alone to aid the body in its immune system by incorporating healthy bacteria into the intestines. If it was ever served sweet, it was a rare treat for breakfast in which honey, cinnamon and pistachios were added.

From ancient writings, such as the Bible or Quran, yogurt (Laban), is referred to as a healthful and filling food. Also taught to be rich in minerals and vitamins providing also, an easily digestible source of calcium.

Yogurt has been used for the treatment of burns and cuts and because of its antibiotic properties, it has been widely embraced dietetically for stomach ulcers. What a delicious way to stay healthy!

While yogurt, in our current times, is most often a breakfast meal or an ingredient in a Healthy Smoothie, in Mediterranean cooking yogurt was always served with meats to aid in digestion.

A favored yogurt dish served alongside a savory meal is one with cucumbers, mint or other fresh herbs and served as a salad or side dish, known as Tzatziki.

And while I often use yogurt in the making of my summer popsicles, such as my favorite Blueberry and yogurt popsicle, swap out milk for yogurt in many of my cakes (Sage and Lemon Tea Cake), and muffin recipes, I also love it as a savory breakfast served with poached eggs, a Turkish dish called Cilbir.

I always thought of yogurt as an important digestive aid when eating meat. It was thought that the probiotics in the yogurt were exactly what the body needed to process the meat internally.

Meat wasn’t always monitored by government agencies to be free of bacteria. In the countrysides of Syria, or Nomad life of the desert, meat was slaughtered, roasted and eaten.

Sometimes it was left to hang after it was slaughtered, which tenderized the meat but also increased the risk of bacteria forming in the meat. Yogurt, with its antibacterial properties, was a good solution to ward off tummy troubles.

Types Of Milk For Yogurt

While I wish I was able to obtain sheep milk where I live here in America, I am grateful to live in an area in which fresh, local cow’s milk is available.

Sheep milk has a higher fat content, which makes for a creamier yogurt as does goat milk. Oddly enough, both sheep and goat milk is easier to digest and is my preferred milk for homemade yogurt.

How To Make Homemade Mediterranean Yogurt

One very important ingredient is needed to make homemade yogurt; a cup of yogurt from a previous batch. Sound easy? It’s not.

Finding a store bought brand of yogurt with real live active cultures has become something of a challenge. No so years ago.

Once you have a reliable brand to start your first batch of yogurt, just save a cup for the next batch.

Milk is simmered slowly in a large pot on top of the stove until a bubble of foam forms and begins to rise up. Turn it off and let it sit for a few minutes, then repeat.

Allow the milk to cool until it reaches about 110 degrees. Stir in the room temperature starter yogurt. Cover and allow it to sit out overnight. In the morning, transfer to the refrigerator to chill. The yogurt is now ready to enjoy.

Homemade Mediterranean Yogurt, an ancient technique, is simply boiled milk, added starter, a warm blanket wrapped around until it sets in the pot. 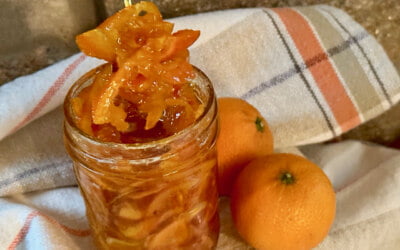