Eggplant, zucchini and peppers roasted in herbs and layered in strips across a homemade pizza dough with a schmear of pesto and a sprinkle of Manchego cheese.

Ratatouille is a rustic, French countryside dish. When you grow lots of tomatoes, zucchini and eggplant during the summer months, you often end up with more than you can eat.

Ratatouille is the resolve for such an overgrown garden. The veggies are simmered and reduced, like a stew with many of the Herbs de Provence; thyme, basil, marjoram, oregano and of course a little wine.

It condenses a large mass of veggies and serves beautifully with crusty bread, over pasta or freeze small batches for the winter months and enjoy your summer garden all over again.

If the rustic French version of a summer garden is condensed veggies into a lovely spread, let’s construct those same lovely summer garden vegetables, while they still look plump and colorful, into the most beautiful topping for a pizza!

After all, a Mediterranean Ratatouille Crostini is the reduction of summer’s vegetables on top of a crostini, why not roast the same vegetables in visibly large cuts and serve them constructed over a homemade pizza dough.

Homemade Pizza Is The Best

Who doesn’t love pizza! Thick crust or thin, there is something totally scrumptious about well thought out toppings over a homemade crust.

When a pizza crust is homemade, what goes into the dough can be as thoughtful as what goes on top.

With an easy to make (really, all my kids make this dough, and have since they were teens), Homemade Bread dough, I add grated cheeses, sometimes garlic and always herbs to make the crust just as much the star of the pizza.

Tomato sauce ain’t the only sauce in town! In fact, once you’ve had ‘green’ sauce on your pizza you will realize where the real flavor in your pizza is coming from.

Pesto, salsa verde and Chermoula. Green sauces that have no tomatoes in them. For this pizza I chose the Moroccan Chermoula sauce. It’s fast to make and keeps in the fridge for days.

Nothing fancy and no cooking. Just toss the ingredients into a food processor or blender and in one minute you have a scrumptious sauce.

Make plenty. Have some on your pizza and on another night try roasting a Whole Fish or lamb with Chermoula. If you’ve any leftover, freeze it for all your cold weather soups and stews.

While my first ratatouille was made at the end of summer from garden veggies or my local farmer’s markets, this pizza was created on a chilly spring evening.

Making this pizza assured me of which vegetables and herbs I will be planting in my garden this summer.

In fact, the seeds have already been started indoors so I can experience the excitement of the months ahead and the many batches of ratatouille I will be making.

Eggplant, zucchini and peppers roasted in herbs and layered in strips across a homemade pizza dough with a schmear of pesto and a sprinkle of Manchego cheese. 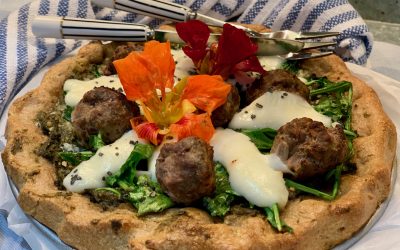 Spinach pesto pizza 2-ways, for picky eaters, with a spelt crust or wheat, meat or not but definitely lots of veggies hidden in the pesto sauce.  Spinach Pesto Pizza 2-Ways Americans Love Pizza Americans probably love pizza more than Italians. Why? Maybe because...

END_OF_DOCUMENT_TOKEN_TO_BE_REPLACED 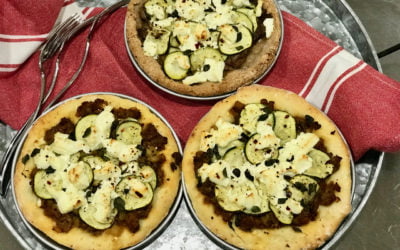 Mediterranean meat pies, known as Sfeeha, are a fast rising flat-bread dough with sautéed meat, veggies and topped with feta cheese. Sfeeha - Mediterranean Meat Pies Food Network and Valerie Bertinelli A winning twist on this traditional dish was made on Food Network....