The sweet smell of apples and warm spices baking inside of a buttery pastry is the first smell of Autumn.

Can you smell the spices of Autumn when you look at this scrumptious apple pie? All summer it’s been light and fruity desserts. The days are shorter, the sun less intense and you have already stacked firewood for the season just ahead. Nothing says Autumn, like an apple pie. Sorry pumpkin, you will get your turn. Besides no one knows if a pumpkin is a fruit or a vegetable, and since summer is still lingering in the air, we still want fruit! We want warm spices that smell of holidays promise hanging in the air. We want a buttery pastry wrapped around a beautifully baked apple. We want this pie, Autumn’s Best Apple Pie!

Not every apple pie needs a crust on top. If an apple pie is baked open and without a crust, the natural sugars in the apple caramelizes in the heat, which gives a golden color to the tips of the apples. Sometimes I like to take a few pie crust scraps left over, roll them out and press a few shapes to lay across the top before baking but still leave the apples exposed.

As is often the traditional style of baking an apple pie, a second crust is rolled out and placed on top of the mound of apples, piercing a few steam holes in the top. The apples steam/bake in a covered apple pie but don’t take on the golden color they would if the pie is open, however a cover crusted apple pie makes for a very impressive pie, visually.

Granny Smith apples aren’t the only apples good for apple pie baking. Years ago I lived up state New York, in the town of Ithaca, where Cornell University is. By the first of September, people had already taken out sweaters, switched their wardrobe from summer whites and pastels to the warm earthy colors, plaids and flannels of Autumn. The chill was in the air. Apple cider was already filling everyone’s cup, with or without a little booze. Which, by the way, you will not want to skip through Autumn without trying my Apple Cider Toddy! Talk about the warm spices of Autumn, kissed with a little rum!

Some of my favorite apples from up state New York were the Stayman Winesap, Jonathan and Cortland apples. These apples are tart and sweet and are so delicious in baked goods, that is if you don’t eat them all before you can cook with them.

It’s easy to see why an Autumn Apple Pie became the national dessert of America. Careful planting of a variety of apple seeds, which probably came from England, throughout the states of New York, Pennsylvania Virginia and Ohio, led to an abundant harvest of fruit in early Autumn. Apples then were able to be preserved, canned or dried for use in a variety of recipes throughout the cold winter months when there were no fresh fruits available in most states.

While freezers were not common in homes back in early times of America, they certainly have become common place in the home now, sometimes owning more than one. Apples freeze beautifully, and when thawed for the baking of an Autumn Apple Pie, in the dead of winter, they will be almost as juicy and sweet as when you prepared them, far better than canning in my opinion. So, be certain to visit the farmers markets during Autumn, stock up and freeze bundles of freshly peeled, cored and sliced apples. When you are ready to bake your pie, all the work will already be done!

Imagine, for just a moment, Kitchen Life 200 Years Ago. What it would be like to want a slice of delicious Autumn Apple Pie, but first you must milk your own cows, in order to make your own butter. Pick your own apples and carry bushels of them back to your kitchen by horse drawn wooden carts. Once you have finally assembled the luscious pie ingredients you are about to bake (one week later), now you must gather wood, build a fire inside the iron fire stove before you can begin to smell the sweet aroma of a freshly baked Autumn Apple Pie…

The most amazing thing was laid right in my lap about ten-years ago. The original, handwritten pages from the late 1800’s, by a woman, Adelaide Hall, about life in her kitchen growing up on her farm. It was intended to be published into a book, but I will never know the story as to why it wasn’t. In the pages, which were written in quill and ink on a paper that has yet to crumble and disintegrate, I found stories about apple picking, apple pie making, their first stove at home and life, unlike anything we can imagine now.

Long story, which I will share in my Lifestyle section, but I spent months deciphering her story, compiled it into a paperback book, of which you can purchase on Amazon through my store. Here are the pages from the original writings about apple picking, apple pie making a more apple stories in her kitchen as a little girl growing up in a northern state in America, which gets bitter cold in the winter. Enjoy, and by all means, pick up a copy for yourself, your children or your grandchildren. But first, let’s make our own, very easy Autumn Apple Pie! Whew, thank goodness we don’t live back then!

The sweet smell of apples and warm spices baking inside of a buttery pastry is the first smell of Autumn. 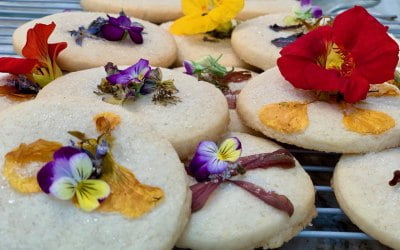 Butter, mascarpone, a sprinkle of cardamom with a variety of edible flowers on top. There is no cookie prettier than one that has been dressed with edible flowers! Edible Flower Cookies For Special Occasions Who Eats Flowers! Flowers Are Nature’s Perfect Art Work....

END_OF_DOCUMENT_TOKEN_TO_BE_REPLACED 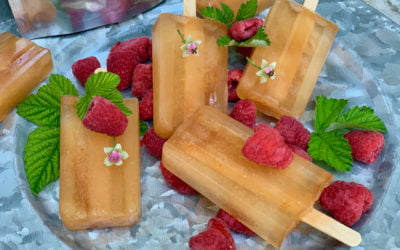 Raspberry tea made from a robust caffeinated tea leaf, raspberry leaves and the raspberry fruit, sweetened with honey and a twist of lemon peel, makes for a refreshing summertime popsicle.   Raspberry Tea Popsicles What Are Popsicles? Popsicles, my British hubby...