Baklava, also known as Baklawa, is a sweet Middle Eastern pastry made with layers of paper thin phyllo dough filled with crushed nuts and spices, and sweetened with honey.

What Is Baklava or Baklawa?

The sweetest word I’ve ever heard? Baklava! I grew up in a Syrian/American home and Baklava (we call it Baklawa, while Greeks call it Baklava), was made often simply because it is so easy to make. Yes… Easy!

Dessert Pastries Are A Mediterranean Tradition

When I was growing up, no one knew of Baklava unless your family was Middle Eastern or Greek. Now, everywhere in the world has tasted this luscious, dare I say, almost healthy dessert.

There are many variations on this dessert; which nuts to use, simple syrup verses honey, but for sure they are all delicious.

Not every grocery store sells ready-made Middle Eastern pastries. Making them at home is easy if you are able to buy phyllo dough.

As a kid, once a month we would drive into DC to shop at the Middle Eastern market. Back then, it was the only place to buy phyllo dough.

The metal tins of thick honey imported from Lebanon, are what I remember most about those markets.

We filled our market bag to the brim. Happily knowing we were once again stocked with fabulous cooking ingredients for the month.

Phyllo Dough, believe it or not, was actually made in the homes of many Middle Eastern women. Imagine how tedious that must be. Thank goodness we are now able to buy phyllo dough in the freezer section of most grocery stores across America.

This paper thin dough is unleavened, which means it is made without yeast or any other rising agent. It is basically just flour, vinegar, oil and water.

Once it is rolled paper thin and used for a variety of recipes, both sweet and savory, it bakes to a beautifully crunchy finish. The more layers, the more the crunch.

Nuts are an individual preference. The Baklawa we made when I was growing up was always made with pistachio nuts, which were often very expensive. We stacked the pastry thiner to save on the cost. Walnuts quickly became the nut of choice for my family since it was easier to find and less expensive.

The nuts get ground to an almost powder, with some spices added. Sugar is not added to the filling of nuts since the honey or simple syrup is poured on after the baklava bakes.

Cinnamon is often the preferred spice added though a creative mix of spices, such as cardamom, cloves, nutmeg or other favored spices, certainly compliments the ground nuts.

Honey vs Simple Syrup. This has been a debate for as long as I can remember when making Baklava.

Throughout regions of Lebanon, Syria, Israel and Greece the most amazing bee farms can be found. Families often keep a large container of honey in their homes.

Here in America, not so much. In fact it was only in recent years that real honey could be found in markets across America. Before that, the honey that was (often still is), sold in grocery stores (I’m sorry to say), poured like pancake syrup and is not real honey.

What Is Simple Syrup?

Simple syrup is simply sugar and water boiled until it begins to thicken. Often a cinnamon stick, or an orange or lemon peel would be added to flavor the sugar water.

After years and years of making Baklava/Baklawa I have created my own blend of both simple syrup and honey. I use orange juice instead of water, adding a splash of Orange Blossom Water or Rose Water.

Traditionally, I have always made a sheet pan of baklava, cut it into diamond shapes. Secondly, once baked and sweet honey syrup added, I place each piece of baklava in a pastry paper or cupcake paper.

This method makes serving baklava easier and it stores best this way so you simply pick up one slice and not have to cut it from the sticky pan.

Quick Pistachio and Honey Pastry is another favorite traditional pastry I have put my own twist on to make it fast.

While almost every recipe you will find bakes baklava at 350 degrees, something unique happens when you bake baklava low and slow.

Baking baklava at 250 degrees (F), for 2 hours allows the layers of pastry tucked deep inside the thick layer of crushed nuts, to bake crunchy and crisp without the outer layers of dough becoming over baked.

One of the biggest complaints about eating baklava is that the nut filling often falls out from the already messy pastry dough. My new secret that keeps that from happening, is to put an egg into the crushed nut mixture. It holds the filling together beautifully.

Having grown up making Baklawa (also known as Baklava), and then having the opportunity to make it on national television was the ultimate!

Season 1 Episode 1 of The Great American Recipe is where I made my family’s favorite Syrian dessert!

Baklava is a sweet pastry made with layers of paper thin phyllo dough filled with crushed nuts and spices, and sweetened with honey.

This is the real deal, not the imitation simple syrup stuff some restaurants serve. So rich and melt in your mouth!

Thank you so much! It turns dessert into a special occasion!

Love your baklava Robin . So rich and delicious. Your recipe is so easy to follow and love the pictures!

Sharing family recipes is the best way to make memories! 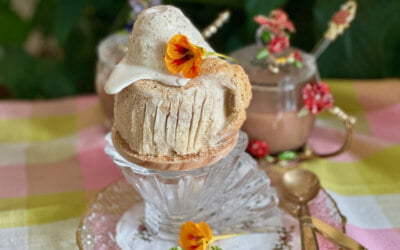 Tea And Toast Dessert is my whimsical creation of a bergamot tea cake with hot toddy icing, toast ice cream and toast dust. Tea Time Anyone!   Tea Cake Hot Toddy Icing and Toast Ice Cream The Comforts Of Tea And Toast Simply the sound of the words ‘tea and toast’,...

END_OF_DOCUMENT_TOKEN_TO_BE_REPLACED 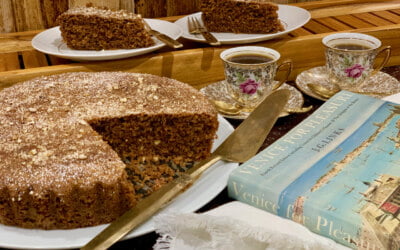